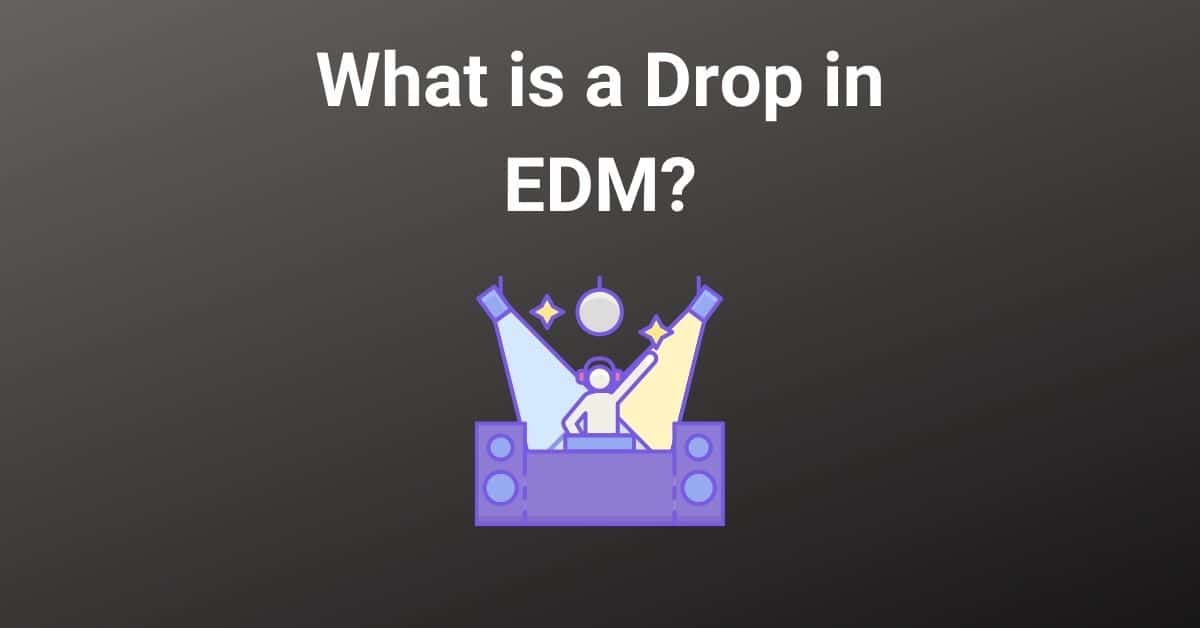 Do you ever wonder why EDM music so addictive, fun, live, and basically the opposite of boring?

It’s because of the characteristic of the music itself that is the dynamic.

The structure of the music is full of ups and down with multiple build-ups and drops.

This is what makes the song so interesting and fun to listen to even for hours.

If the longer format consists of only beats with no interesting build-up and drop, it will sound boring and flat. This is why EDM artist creates an interesting dynamic and flow that keep the music interesting.

EDM enthusiasts know what drop is for sure. But, some people can be confused by the definition of a drop.

Even a hard-core EDM lover doesn’t know the right way to define an electronic music drop even though they can identify and point it out right away.

This article will discuss EDM drop and everything you need to know about electronic music drop.

What is a Drop in EDM?

A drop in EDM music is a term used to refer to a part of the song that is most exciting or pleasurable.

The term drop is used due to the nature of the part that appears after a build-up.

The build-up is designed specifically to guide the listeners toward the drop that sounds exciting and also satisfying.

The build-up in the EDM songs is the section where the tension increases and makes the listeners wait for the drop.

After the beat drops, they feel some kind of release. EDM lovers will understand why listening to EDM songs can be both satisfying and addicting.

The drop is the portion of the song after the build-up. After a very tense build-up, usually, there will be a pause with no sound for a second, and then a heavy bass or drum kicks in. That’s the drop.

Usually, a drop is followed by a dynamic piece with a fun flow that can make the crowd go crazy. The drop is usually also created in a unique pattern and recognizable features such as repetitive vocals, fast-paced hi-hat patterns, and melody as the main identity of the song.

Some EDM creators even use the same element on every song to create a unique characteristic of their work. And there is no better part to use that personality element other than the drop.

After the beat drops and the music continues for a while, the artist will repeat the cycle and create another build-up leading to another drop.

And the whole design continues till the end of the song.

Why Is It Called a Drop?

It is called a drop because of the dropping sense of dynamic.

As an analogy, you can think of a slide. Before we go sliding, we need to go up the stairs.

That’s the build-up. When you reach the top, you will take a pause for a moment and get ready for the drop, which is the exciting part of sliding all the way down.

It is almost identical to EDM music. The DJ will create a build-up that will make the listeners go on intense anticipation, and after they touch the climax, they will give a second of pause or silence and then drop the beat that will release all the tension before repeat the whole cycle all over again.

In short, it is called a drop because there’s an actual drop of tension, beat, heavier bass, and the listener will also feel some kind of release as if they just drop the tension and that will make them feel some kind of trance or happy feeling.

How to Make a Drop in EDM?

If you want to make EDM songs, you need to understand the anatomy of EDM songs which is an intro, build up, climax, and then beat drop.

Now, how to create a drop? To create drop in EDM, you need to use programs such as FL Studio, Ableton, or other music editing software.

With this digital workstation, you can create sound kits and custom sounds as well as creating beats, build up, and drops.

After that, you need to understand the construction of the songs including the composition of the drop. A drop can be achieved by creating a transition into an interlude of repeating sounds with increasing drum speed and volume.

The drop of the song may consist of heavier bass with a slower tempo along with an atmospheric synthesizer and hard-hitting drum.

The drop is usually slower and deeper than the build-up but more powerful in volume and has a unique, recognizable pattern.

The build-up is an important part of the song because it is the part that draws attention to the drop by creating tightness and anticipation.

While the drop is something recognizable usually with repetitive lyrics that can be memorized easily.

The sequence continues and is repeated numerous times throughout the song. For a short song, the drop can occur two to three times, but it can appear more in longer songs.

In longer songs, you can use a different variety of drops so it’s not always the same every time.

You can also create a drop followed by build-ups and repeat the cycle to build the suspense towards the final drop.

Looking for some examples of beat drops?

A drop is an essential element in music especially EDM genres. The drop is what makes the entire music interesting. An EDM drop helps create the identify of a song.

It is usually repetitive and enjoyable. The EDM drop is usually the main characteristic of EDM song.

Aside from making the song easily recognizable, it is also the most important part to be played at parties to make sure the crowd having a pleasant time.