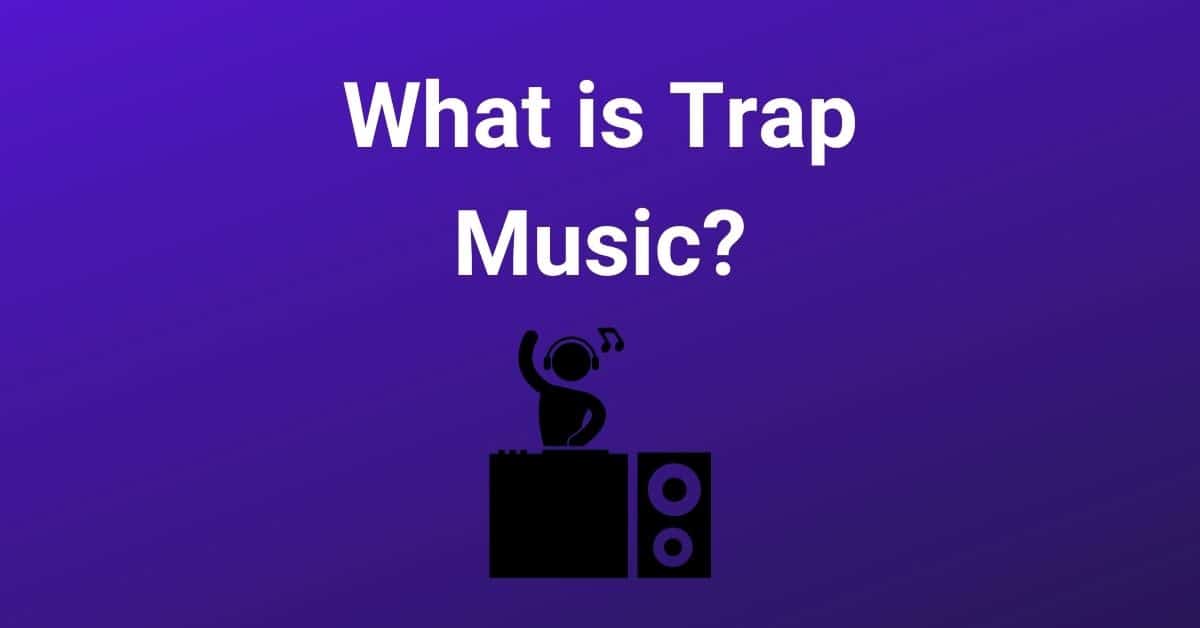 Trap music is no stranger to the partygoers of today. Along with the rise of young rappers, trap music is one of the most-streamed genres on online platforms like YouTube and Spotify today.

Though popular, not everybody is familiar with what trap means, where the music originated, and why it is so frequently played.

In this article, we will go a little deeper so you will know everything there is to know about this groovy genre.

What is Trap Music?

Trap music is considered a subgenre of rap or hip-hop in general. The music is characterized by heavy synthesizer, complicated hi-hats pattern, atmospheric synths, and lyrical content, typically with references to heavy drug use and/or urban violence.

Almost all the tracks are produced digitally on a computer, even the vocals— it is usually created using very few real instruments. You may notice that the vocals on trap music are often auto-tuned, either subtly or heavily.

To create a “darker” ambiance, trap music is usually accompanied by specific melodic and symphonic characteristics. These sounds are meant to create an atmosphere of general uneasiness.

Listeners are primed to feel “trapped”, as the name of the genre suggests.

Eerie sounds, a dark undertone, and sharp lyrics in reference revolving around the cultural life of a “trap” neighborhood— these are the usuals of trap music.

Popular themes include violence, street life, challenging life experiences, vehicles, and the sentimental bond between the artist and their neighborhood. Trap is not a simple mixed salad of dissonant noises; it is a piece of complex, multidimensional music filled with urban references.

When it comes to discussing the invention of a genre, it is hard to pinpoint a specific person. As we all know, music is not something that is invented out of nowhere.

Especially in this modern era with heavy saturation, many “new” music styles are actually recreations inspired by pre-existing tones. This is also the reason why such a question would bring about heated debates.

For instance, T.I. and Gucci Mane both claim to be the father of trap music. Of course, you are free to side with either one because both parties have their own reasonable arguments for the claim. But for the sake of a fair argument, let us take a look at the chronological timeline of trap music.

But was that the first album produced with eerie synthesizers, powerful kicks, and the iconic complicated hi-hat pattern altogether? No. According to an interview on Complex, the person responsible for combining all these elements is a musician none other than Shawty Redd.

Before releasing ‘I’m Serious,’ in 2000, Redd produced an album for the rapper Drama. The album called ‘Causin’ Drama’ has all the classic characteristics associated with trap music.

Shawty said Drama came to him with a concept of musical sounds in his head. Drama demonstrated this imaginary concept by pounding his chest while simultaneously rapping to Redd to bring his point across.

Redd then tried to translate the concept into a drum pattern. One problem, though, he felt like the track was lacking something. He decided to ramp up the music by adding hi-hat elements to balance the tunes with a slower beat.

Shortly after ‘Causin’ Drama’, Shawty collaborated with Lil J (later known as Young Jeezy), a name that is most likely familiar for trap fans.

Regardless of the debate, it is pretty certain that T.I. is the guy responsible for naming the genre. But when it comes to bringing all the elements together, Shawty Redd is historically the first to do so.

How is Trap Different from Rap?

Trap music is a subgenre of hip-hop rap. As hip-hop is now considered a musical genre and a whole subculture with a specific lifestyle, it is an umbrella genre for many styles of music.

One of the main pillars of hip-hop is MCing or rapping. There is a distinct difference between trap and other rap, though.

One of the most distinctive features of trap is the theme of the lyrics used. Trap artists often reference drugs and violence in their lyrics (this is not something new in the rap scene).

The difference exists mainly because trap artists portray their experiences as a forced circumstance of being trapped in the industry because they have no other choices, instead of glorifying the lifestyle as an ideal one.

To be more technical, trap music has a faster tempo compared to hip-hop. Hip-hop tempo is usually around 90 BPM, while trap is usually between 115-170 BPM.

The other difference is the musical aspect of the tracks. Trap music is known for its busy hi-hats. It is the most distinct element that differentiates trap music from other hip-hop rap.

One thing to remember about trap music is the lyrical theme. It is very important as it is the essence of trap identity. A track is not automatically “trap” just because it has a high tempo or other trap elements. If the lyrics are not telling stories of trap culture, it cannot be considered trap music.

Is Trap Music a Rap or EDM?

Trap historically originated from southern rap. Because of this origin, we cannot separate trap from rap because trap tracks involve rapping with their own variation.

Nowadays, many EDM artists adopt the trap sound and combine it with their dance tracks, thus creating a hybrid between trap and EDM, creating something that can be described as a “dance-able” trap.

Trap music artists are also evolving and producing tracks that lean more toward EDM while keeping appropriate themes of drugs and violence.

We can also hear a lot of big rap superstars adopting trap sounds to their work. Hand in hand, all of the factors above create a new wave of trap influenced EDM that we can see dominating the charts in recent years.

Why is Trap Music so Popular?

There are so many factors that make a genre mainstream. Usually, a musical genre gains its popularity because it is relatable or “easy” for the ears.

If we look into the lyrical aspect of trap music (glorified street style and drug abuse), it is hard to say that the music is relatable except for a specific niche. Using the other explanation, we can claim that it gained popularity because it is easy to listen to and is not dull.

Different elements of the fast-paced hi-hats pattern that make it different from previous hip-hop tracks are notable factors. Trap music offers something different and unique. It offers more energy, freshness, and excitement.

Trap music combines slow beats with fast-paced hi-hats, making people feel as if they are listening to two tunes simultaneously. This tricks the brain to engage more in the music without feeling bored.

The renaissance of new young rappers and their keenness to incorporate trap elements, as well as other established rappers, is also a contributing factor. It also helps that this genre is now frequently used in movies and video games.

We also cannot ignore the use of social media and streaming platforms among the youth, supporting the growth of most musical genres, including trap.

Top 10 Trap Artist to Get You Started

Coming from the home of trap music, Atlanta, T.I. is often called the father of trap music. His release ‘Trap Muzik’ album in 2003 sold 10 thousand copies in the first week and debuted number four on the Billboard 200.

Mane is a respected musician and is often noted as being influenced by Atlanta’s young rappers.  Along with T.I. and Jeezy, he is part of the trap trio.

Jeezy is a big name in the trap scene. His debut album ‘Let’s get It: Thug Motivation’ is often referred to as the greatest trap album of all time.

From being on the top charts of the Billboard, Rick Ross now runs his own music label Maybach Music Group.

His video of ‘I Don’t Like’ and ‘Love Sosa’ generated over 30 million views on YouTube. It brought velocity to the rise of his artistic reputation and also to the trap scene in Chicago.

He uses a lot of southern twang and slang words making his works that bring elements of lightheartedness unique to other trap music.

21 started his rap career after getting shot six times in a near-death experience.

Lil baby gained his popularity after a short two years after his album ‘Harder than Ever’ ranked number three on Billboard 200.

Though often labeled as a “mumble rapper”, his distinct playful style carries enough brilliance for him to collaborate with other big artists.

Top 20 Trap Songs You Should Explore

Meanwhile, if you are looking for trap tracks to listen to, you can start with this list:

Where is Trap Music Popular Today?

It is popular everywhere all around the globe. There are so many trap tracks dominating the charts in the past few years, and there is no sign of a slowdown.

Trap music has become not only a music genre but also a cultural phenomenon. People from different age ranges listen to it, from boomers in their 50s to too-young-gen-Zs (who are not supposed to listen to these explicit lyrics).

The rise of many social media platforms increases the growth of trap music, especially with people sharing their playlist easily. There are more trap tracks incorporated in movies and video games as well.

With the fusion between trap and EDM, the music becomes even more popular to the point that you may have unintentionally heard the music.

It is almost safe to say that everyone knows this music except those who live in isolation with no internet (or other general social hermits).

Trap Music’s Popularity and Growth in the American Scene Today

We can say that trap music is at its peak of popularity today. Not only in America, but also worldwide. We can find the influence of trap music in other countries, including in the K-pop industry.

The trap genre is increasing its popularity with the rise of so many trap artists such as Migos, 2 Chainz, Post Malone, and Travis Scott.

And it is gaining even more popularity since popular artists such as Rihanna, Lady Gaga, and even Taylor Swift are influenced by trap sounds. We also witness a music phenomenon when Lil Nas X and Billy Ray Cyrus release the trap-inspired track ‘Old Town Road’.