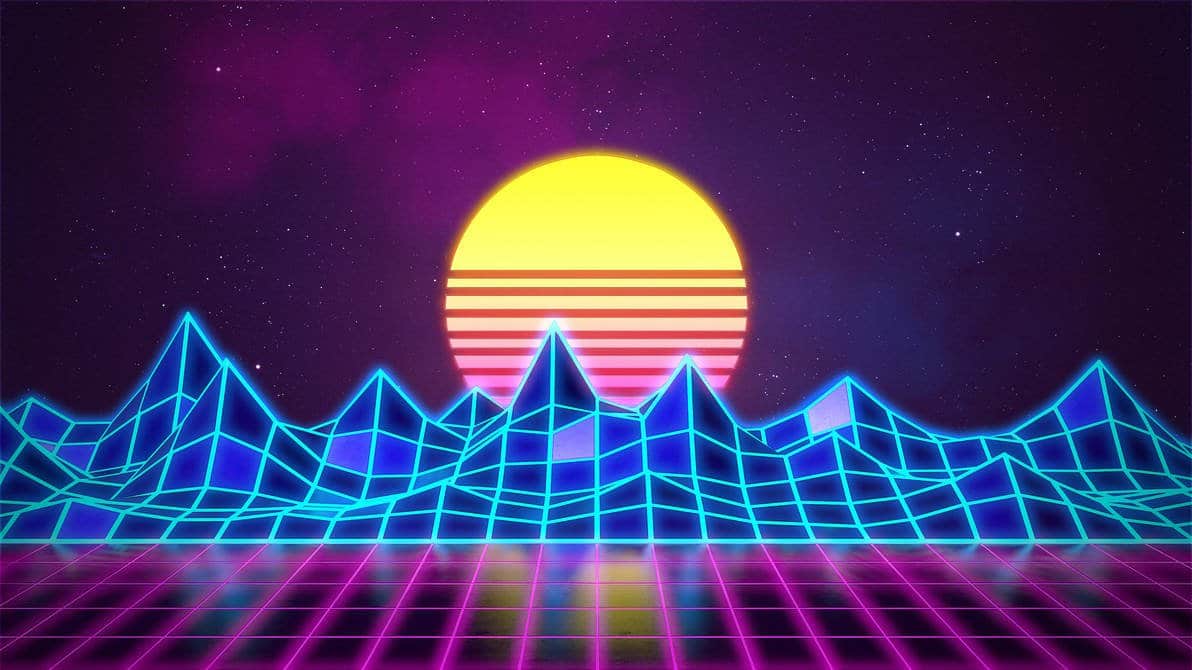 Born from the very heart of the retrowave movement, Synthwave music has undergone rapid transformation since it was first identified in the mid 2000s, branching and splintering off into a number of subgenres.

It is important to first understand what is synthwave and the meaning of Synthwave as a term.

Where retrowave covers a wide variety of media, Synthwave describes specifically the music of this era.

Despite its distinct 1980s sounds and imagery, Synthwave music is not actually a product of the past, but rather a nostalgic 21st century tribute to the unique decade.

Synthwave has its roots deep within the underground community.

In the mid-2000s, pioneering French house artists such as Justice, Kavinsky and David Grellier (known by his stage name College) gained popularity due to their 80s inspired tracks echoing film works by Carpenter, Goblin and Brad Fiedel (see below for Cinematic Synthware).

Since then, the genre has undergone a radical transformation, evolving into its current form as we know it.

What are the Different Styles of Synthwave?

Primarily an instrumental genre (with some exceptions), the concept of Synthwave music gained followers and momentum through the years.

Producers and musicians began pushing its boundaries, borrowing themes and motives from other musical genres which led to the genre splitting into multiple subgenres and styles.

I. What is Outrun Synthwave?

One of the aforementioned subgenres is Outrun.

In the early days of Synthwave, “Outrun” or “Outrun electro” were used interchangeably with “Synthwave” to describe the musical style the genre first adopted in its formative years.

The use of the name Synthwave to describe the genre as a whole gained popularity around 2014, but Outrun is still used today to describe early releases of Synthwave music.

Named after the popular 1986 arcade game ‘Out Run’, the music of this subgenre featured prominent themes with a focus on 1980s supercars, night drives, beachside sunsets, and vintage science fiction.

Clichéd elements of the 1980s made their appearances often in Outrun music, such as electronic drums, gated reverb and analog synthesizer bass lines and leads.

II. What is Retro Electro Synthwave?

The subgenre Retro Electro was initially another common name for early Synthwave releases, as Outrun was.

However, as the Synthwave continued developing and more subgenres were being added, Retro Electro came to be used to describe Synthwave music infused with more modern production and electro elements.

For clarification due to the often misunderstood use of the term, electro music was originally developed in the early 1980s and retains and iconic sound due to its blend of funk and Synthpop with hip-hop turntablism.

Retro electro on the other hand, updates the classic electro sound, bringing it into the new century with its vibrant new take.

III. What is Cinematic Synthwave?

As suggested by its name, Cinematic Synthwave is heavily influenced from movie scores and media soundtracks of the 1980s such as John Carpenter’s Escape from New York, Vangelis’s Blade Runner, Brad Fiedel’s The Terminator, and Tangerine Dream’s Thief.

Musicians and artists often play with the Cinematic Synthwave subgenre when creating music for contemporary video games, television and movies as heard on Power Glove’s Blood Dragon (2013) and Meteor’s Voyage into Fear (2018).

As artists try to emulate film scores as close as possible, Cinematic Synthwave music can sometimes be almost indistinguishable from its source.

Due to this very specific source material and style, this subgenre is often only represented by a couple of distinct songs from albums by Synthwave artists of various different styles.

IV. What is Dreamwave and Popwave?

In the early 2010s, a new sound began emerging within the Synthwave soundscape that embodied softer textures, breathy vocals and a slower downtempo beat.

Perhaps the most well known example of the Dreamwave subgenre is the track “A Real Hero”, a collaborative effort by Electric Youth and College that was featured on the 2011 movie, Drive.

Interestingly, many artists working with the Dreamwave style began favouring many pop and mainstream genre elements such as a softer production touch, more elaborate rhythm sections, and a myriad of modern effects.

More dramatically, vocal styles bear little to no resemblance to music of the 1980’s that characterized the Synthwave genre.

The new emphasis on pop structures led to the creation of the subgenre pop Synthwave, or Popwave, with the resulting effect being the dramatic rise in popularity for Popwave among mainstream audiences.

V. What is Dark Synthwave?

Returning back to the time of early Synthwave music, the beginnings of the subgenre Dark Synthwave or Darksynth had shown some of its potential in early Outrun releases such as Kavinsky’s Wayfarer and FutureCop’s As Seen on TV.

Unlike the more utopian take on 1980s nostalgia that was heard in Miami Nights’s and Mitch Murder’s albums, Darksynth music focused on darker elements from the 1980s, using material from B horror movies, pulp science fiction, and comic books as reference sources.

The subgenre emerged in its full form in 2012 with album releases such as Perturbator’s Terror 404 and Mega Drive’s VHS and since then, began expanding rapidly, gaining traction from a surge of fans and producers from a variety of genres not exclusive to Synthwave.

This new form of Synthwave often shared common features with Outrun, but with a veil of horror-infused influence that experimented with coarser effects and a grittier sound.

In 2016 and 2017, the Darksynth subgenre reached its peak in popularity, almost overtaking the original and more traditional sounds that characterized Synthwave, essentially becoming a genre on its own.

Elements from genres such as dubstep, trap, industrial and metal further lent their hand in the deliberate evolution of the subgenre, further distancing itself from its ourtun roots with music such as Pertubator’s New Model (2017), Lazerpunk’s Death & Glory (2018), Carpenter Brut’s Leather Teeth (2018), and Gost’s Posessor (2018).

VI. What is Cyberpunk Synthwave?

As Darksynth experimented further with its rhythms and distorted synth bass, the direction of its radical movement began fracturing and by the early 2018, a new subgenre had emerged that retained its link with 1980s nostalgia, focusing more on science fiction and cyberpunk themes.

Cyberpunk Synthwave, or Cybersynth, preserved the melodic hooks of the Synthwave genre whilst still incorporating the grittier effects of early Darksynth music.

The songwriting for the Cybersynth music is in general more detailed and complex when compared to other Synthwave subgenres.

Examples of the Cybersynth soundscape can be heard in Zombie Hyperdrive’s Hyperion (2016) album and Nightstop’s Time Recoil (2017).

Synthpop, House and Nu Disco and Their Influence on Synthwave

Firstly, it should be noted that the terms “Popwave” and “Synthpop” are not interchangeable and have their own definition, despite common misconception.

Although technically a genre on its own, Synthpop shares many of its roots with industrial music and overlaps to some degree with Synthwave.

Defined by its primary use of the synthesizer as the dominant instrument, Synthpop came into prominence in the 1970s to mid 1980s as part of the new wave movement.

In the present day, the synthesized sounds of Synthpop can be heard in conjunction with the Synthwave style in music such as Mecha Maiko’s Electric Heat (2018) and in Alex’s album Simulations (2018).

The influence of other external genres such as House and Nu Disco have also lent their features throughout the development of Synthwave music.

Although technically skirting the edges of the Synthwave genre, a hybrid of Nu Disco/ House and Synthwave music were released by artists such as Worship and Flashworx in 2010 that can be heard more recently still in the 2018 albums, Morgan Willis’s Supernova and Garth Knight’s Kitt.

Over the past few years, controversial statements have been released by major voices within the genre, claiming the death of the classic Synthwave and Outrun form.

As this once-underground genre becomes increasingly more popular with mainstream audiences, older fans have begun to be disenchanted from the oversaturated form, finding its originality now a tired cliche.

As a large percentage of these fans consist of an age group that has lived through the 1980s, the idea of a newer and younger crowd of producers and listeners with little to no memories of the era from which this music reflects, is unappealing.

On the other hand, some artists have begun fighting back against this claim, citing the increased interest from mainstream audiences as having fuelled new talent in the genre, and the disenchantment of older fans to simply be a result of the genre feeling less exclusive.

It should be noted that the meaning of Synthwave differs from Vaporwave, which plays more with its ironic commentary on commercialised elements from the early 1990s, such as its over-sampling of elevator music and advertising jingles.

Why is Synthwave Nostalgic?

The 1980s was marked by great socio-economic, political and technological changes around the world.

A decade attributed to the birth of young urban professionals (coined “yuppies”), it is characterised by the sharp rise in materialism and consumerism, layered with the promise of an optimistic future.

In contrast, the turn of the century saw a plethora of major events and disasters in news headlines such as the September 11 terrorist attacks, Iraq war, boxing day tsunami, global recession and hurricane Katrina.

It is hardly a surprise that Synthwave music, with its romanticized retro futuristic sounds, would show its greatest expansion and transformation in a time when the need for a distraction from reality is at its highest.

Samuel Valentine wrote of the genre: “Synthwave is the music for a future that never happened but everyone dreamed about in the ‘80s”, a comment that reflected not just the hopes of the past, but also the hopes of those living in the present.

The interest in the retrowave movement looks far from being over, as subgenres such as Darksynth and Cybersynth have continued to thrive into the new decade and Popwave builds a new following among the younger generations.

If the massive interest (despite its gaming bugs and issues) in the recently released game Cyberpunk earlier this year and in Netflix favourite Stranger Things is anything to go by, Synthwave music may see yet another reemergence in the next few years.

Your go-to source for all things music.