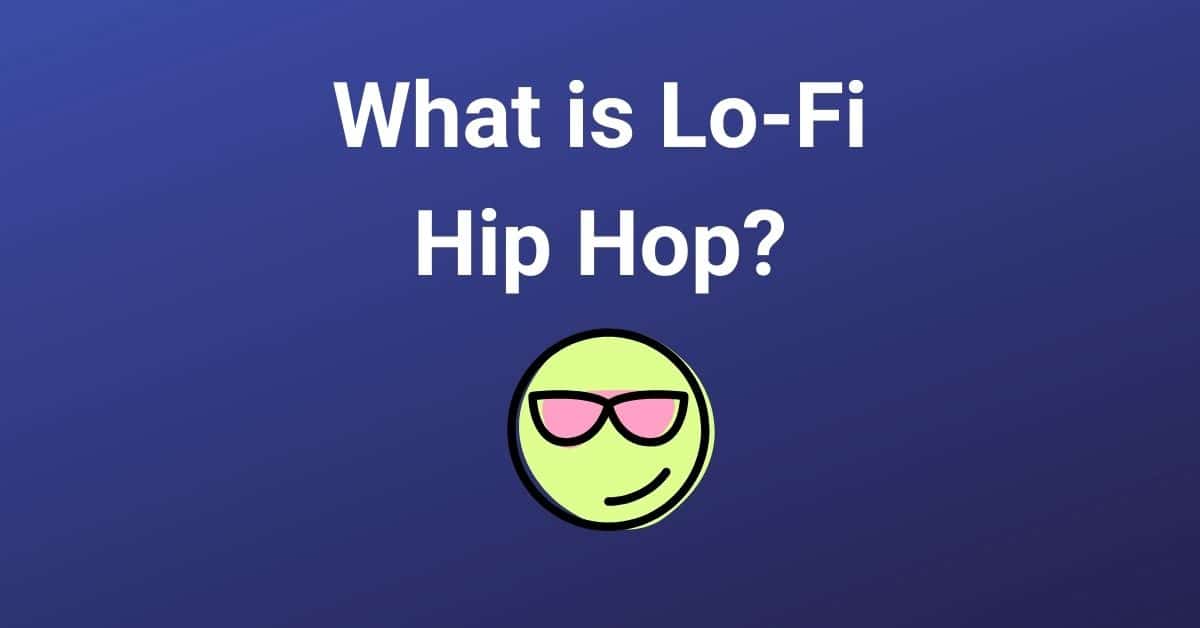 Unless you are living without internet access, you must already have heard about lo-fi hip hop. It is a new genre that started as an alternative genre of hip hop.

Combining different elements of hip hop and other music along with a chill vibe, the genre has gained in popularity exponentially.

You may already listen to the music yourself. And for some of you, you may wonder why this music become so popular?

What is lo-fi hip hop meaning? Is there any explanation on why lo-fi sounds so good?

Below we discuss a little deeper about lo-fi hip hop and everything you need to know about it.

What is Lo-fi Hip Hop?

Lo-fi is short for low fidelity refers to a music production quality with imperfect elements on the recording that is usually considered as flaws in a professional production.

In lo-fi, this imperfection becomes the main feature and considered as its aesthetic. The standard of fidelity or sound quality in music production has evolved throughout the years.

Nowadays, music production has become more and more professional and to a high standard. Old recording that have the elements of low fidelity weren’t considered as lo-fi back then because the standard for all music hadn’t evolved yet.

This explains why there are a lot of modern lo-fi tracks involving old records because the recording quality matches its aesthetic.

Even though lo-fi became a musical genre that is very popular now, it was born a long time ago back in the 1990s.

At that time, there were a lot of musicians who made alternative music that was often called DIY music. They made their music at their home studio.

A lot of musicians also make music in their home studio nowadays, but the sound quality is way different to back then.

The beauty of DIY music in the 1990s involving sounds that are considered undesirable such as a misplayed notes, degraded audio signals, tape hiss, and environmental interference.

Creating an atmosphere where imperfection becomes a part of its beauty. In the latter days, lo-fi become the basis of chillwave and hypnagogic pop music.

Lo-fi hip hop is a branch of hip-hop music with more chill beats and takes the elements from the early day lo-fi music such as imperfect elements and interfering sounds.

This genre becomes popular nowadays on streaming platforms especially YouTube where multiple channels upload lo-fi hip hop tracks that are usually labeled as music for study or music for nostalgia.

The main characteristic of lo-fi hip hop is moody and brings certain feelings and emotions to the listeners.

The history of lo-fi can be traced back to the 1950s when a lot of music was produced cheap and quickly using low standard equipment.

The Beach Boy’s album Smiley Smile which was released in 1967 was credited as the album that invented lo-fi bedroom pop by Pitchfork writer Mark Richardson.

Meanwhile, The Beach Boy’s album Wild Honey which was released in 1967 was credited with the idea of DIY pop by the editors of Rolling Stone.

Both albums are part of a trilogy along with Friends that was released in 1968. Those albums were recorded in Brian Wilson’s home studio and were referred to as bedroom tapes later on.

Jamie Atkins from Record Collector wrote that many lo-fi acts also “owe plenty” to The Beach Boy’s song “All I Wanna Do” which was released in 1970.

By all of the credits and records, it is safe to say that The Beach Boy invented lo-fi. But what about modern days lo-fi hip-hop?

Nujabes fused the elements of hip hop, jazz, and electronic to create a unique richer sound with poignant moods. Nujabes music is more about emotion.

In his music, Nujabes presents innocent feelings along with bittersweet nostalgia, a major characteristic in lo-fi hip hop today.

Meanwhile, J Dilla worked with multiple hip-hop artists. He created hip-hop music with more lo-fi sounds. He created chill beats and laidback sounds and he tries to humanize the drum pattern, so it doesn’t sound too stiff like a robot.

He did it by not using quantization on the drum machine, a feature that will help your drum pattern to be more exact. By disabling this feature, the tracks carry imperfect elements that make them sound more natural.

Who Made Lo-fi Popular?

If you are searching for who made lo-fi hip-hop popular, you may find that Nujabes appears on top of the list.

But to be honest, lo-fi hip hop finds its popularity through platforms such as Soundcloud and especially YouTube.

If you type out lo-fi hip-hop on the YouTube search bar, you will find a list of long tracks with anime illustrations or vintage aesthetic (sometimes the combination of both) titled with chill music for study or music when you feel lonely.

The popularity of musical genres depends on a lot of things, so it is never easy to decide on who makes certain genres popular.

There are so many hardworking artists and producers involved in the process. But we cannot deny that producers who upload their works on YouTube play a big role in the lo-fi popularity in the last decade.

Why is Lo-fi so Good?

Lo-fi has a characteristic to bring imperfection as its aesthetic. The tracks feel rawer, imperfect, real, honest, and therefore relatable.

We may find it hard to relate to unnatural perfect music, but it is easier to relate to something raw that includes flaws. It feels more honest and suddenly we feel understood.

Lo-fi music has just the right recipe for your brain. It is slow enough but not too slow. It’s also not so fast it makes you feel anxious.

It’s not so boring you just forget it in the background, but also not too interesting at the same time it’s distracting you from study or work.

This music keeps you entertained and relaxed at the same time you can focus on whatever you are doing feeling less bored, and you get more done as a result.

Listening to a lo-fi beat on a loop will create a relaxing effect.

Victor Szabo a music professor explained that the element of repetition in the music makes it predictable and soothing for the listeners. Because of its repetitiveness, your brain will easily predict how it will continue to sound so you can focus your concentration on study or work.

Szabo and other music experts use the word cocooning because when you are listening to lo-fi, you feel like you are wrapped in a safe cocoon, protected from the harsh world outside.

This is the reason listening to lo-fi music makes you feel so good. It gives you the feeling like you can chill for a moment and not worry about anything.

Lo-fi Hip Hop Artists to Get You Started

So many talented artists produce lo-fi beats. Below are some of them if you are new to lo-fi:

Nehru started to make hip hop instrumentals and jazz tracks when he was 13. He first released his debut mixtape “Nehruvia” by the age of 16.

Snow is an artist who creates music with no limitation. He created from rainy loops to bedroom pop.

Used to know as a YouTuber under the character Filthy Frank and Pink Guy, now Joji joins the media company 88rising and releasing multiple tracks since.

Watson is a combination of old school and new school creating a perfect character that stands on his own.

The artist has been around for multiple years and released expansive albums. He also works with multiple artists.

Joachim first began his DJ career in the 1990s and now has become a full-fledged producer. He also works with other artists.

Lo-fi has become a part of pop culture. During recent years, it becomes the new aesthetic and dominates streaming platforms as long as other social media platforms such as TikTok.

The impact of lo-fi on pop culture cannot be separated from the use of online platforms.

It’s where lo-fi was born and grew, now becoming a part of our lives. Even when we are not a fan, we can still find them easily in multiple contents.

Lo-fi music is also broadly used including for background for educational content and even literary content. You can easily find spoken words or poetry read with lo-fi music as the background.

Lo-fi music has now become so popular to the point it is almost impossible to avoid.

In the musical industry, lo-fi also has its impact. Especially with more emerging artists creating their music from their very own bedrooms.

These artists even use vintage equipment and record in a home studio with no noise reducer to gain that lo-fi aesthetic.

We already discussed the points above about how lo-fi has a great relation with YouTube.

YouTube is arguably one of the reasons why lo-fi hip hop gained its popularity along with other platforms such as Soundcloud.

A lot of lo-fi producers grew their listeners through YouTube. Even now when lo-fi also become one of the most-streamed genres on Spotify, it is still very popular on YouTube.

Lo-fi also incorporated in a lot of YouTube videos even on non-musical channels.

Lo-fi hip hop may seem simple and repetitive. And even with so many people hating the genre, it still rises and maintains its popularity and is able to make its way to the pop culture mainstream.