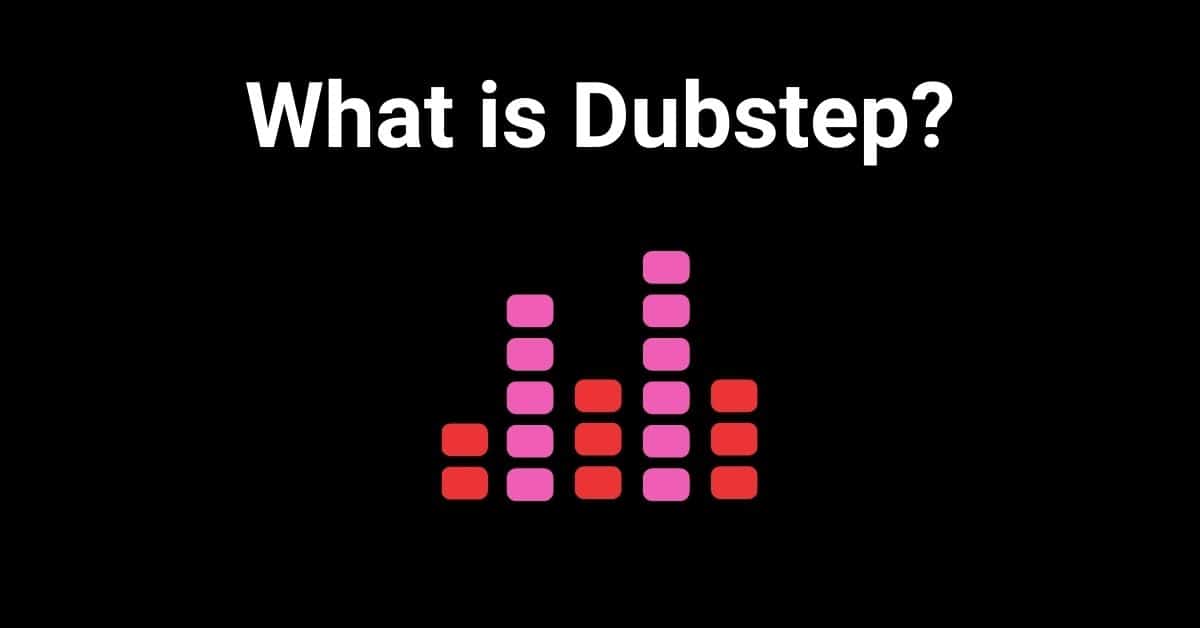 There are many genres in music, and they keep growing as technology advances throughout the years. Many decades ago, music could only be produced using musical instruments.

As the technology evolved, people started experimenting with computers and created music with them.

This is how music produced by DJ’s came to light. People experimented with electronic music more and made several new beats and flows. The results of this experimentation soon flourished into many other genres that people enjoy listening to.

Electronic music tends to be linked to dance music because it often sounds upbeat and loud with jarring bass drops. However many people wonder, what is dubstep?

What is Dubstep (in EDM)?

Dubstep is considered one of the electronic dance music genres.  This genre’s most unique characteristic is that it has a distinct sound, with an irregular composition of bass and distorted sound effects.

Dubstep finds its signature in between the drum’s glitchy beats and dark reverb of Jamaican dub music. Dubstep is defined in simple terms as the fast beat that you feel as a slow groove and flow.

The most distinctive and specific characteristic of Dubstep is its heavy reliance on bass. Every Dubstep genre of music will indeed have lots of bass in it.

It is well-known that Dubstep would not even exist without the bass that fluctuates and drops in between the tunes. Dubstep is a music genre that is an adaptation from UK Garage, which is also a mix of 2- step garage, techno, and reggae.

It branches out from the Drum & Bass genre too. This influence results in the bass being used in Dubstep, and it becomes one of its most essential aspects.

Why is it called Dubstep?

After people have asked What is Dubstep, the next obvious question is Why is it called Dubstep? The name ‘Dubstep’ originated from the two names of the sub-genres that Dubstep evolved from.

Dubstep derives from the word “dub”, which translates to a kind of music that is lowered down to a slow and minimal beat of drums and heavy bass.

The word “step” originated from the phrase “2 step garage”. Dubstep evolved from these genres; however, Dubstep is a stripped-down form of the “2 step garage” genre. “Step” in the word Dubstep meaning something like “dance move” and or “rhythm”.

So, Dubstep actually means something along the lines of “the latest step or rhythm” and possesses the characteristic of something dub-like. Dubstep has a unique flow of having a slow, minimal, but also heavy bass.

The Origin of Dubstep

The earliest prototype of Dubstep could be traced back to the year 1999 to 2000. Notable names that helped popularize Dubstep in those years are producers named Oris Jay, El-B, Steve Gurley, and Zed Bias.

The beat’s basis stemmed from the growth of the sound system party scene in the early years of 1980 in Jamaica. The famous duo – Digital Mystikz (Mala & Coki) are widely recognized as the fathers of Dubstep. They ran the record label DMZ and pioneered the club night of the same name.

Types of Dubstep in the Scene

Dubstep is a sub-genre that branches out from the electronic music class. Electronic music was first mixed with Drum & Bass’s genre, resulting in the birth of the Dubstep sub-genre. Music never stops evolving, though, so more sub-genres of Dubstep continue to be created.

There is no approximate number of sub-genres of Dubstep because it is always changing. The sub-genres with the most popularity have their own names, such as classic Dubstep, filthstep, wobblestep, glitchstep, chillstep, neurostep, robostep, techstep, deathstep, ganjastep.

It may seem hard to memorize each one of the names for these sub-genres, but they all have their own unique characteristics in the sound.

There are actually twenty-five or thirty types of sub-genres resulting from experimentation, but limiting it to the top ten would be best.

Classic dubstep uses all of the wobbly sound effects, with touches of glitch and sound twitches you would commonly hear in most other genres of electronic music.

This is the most basic form of Dubstep, without tweaks that alter its original sound. As always, it consists of lots of bass sounds.

Filthstep is Dubstep but altered so that it would sound lo-fi. It sounds like sounds from 16bit computer games from the 90s. This is one of the reasons why it is called “filth”.

The other reason is that it contains a lot of banging noisy sounds. The music often sounds aggressive in terms of rhythm and usually lacks melody.

Wobblestep focuses on the wobble aspect of Dubstep. Wobble is the name of the sound made from heavily synthesized bass sounds integrated with pitch bends that tackle the frequency spectrum’s low pitch.

Glitchstep emphasizes the sound of a glitch inside the tune, just like how the name implies. Glitchstep puts aside the heavy bass and wobbles and mostly makes glitch sounds. Glitches sound quick and high-pitched.

Chillstep is another sub-genre of Dubstep that people could actually enjoy. Chillstep reminds you and makes you live a dream as if you are inside a calm and peaceful forest.

The perfect portrayal would be something like the forest in ‘Alice in Wonderland’. It makes you feel like you are inside a kingdom in a fantasy-themed video game.

Neurostep has a science-fiction influenced sound rather than being mechanical. It sounds more philosophical and meditative. This sub-genre originated from Neurofunk, Drum & Bass, and Dubstep.

Neurostep often has a cold feeling and atmosphere in its sound. It incorporates mechanical sound. It may sound like Robostep or Deathstep, but Neurostep contains a deeper sound design.

Robostep makes the listener feel as if they are inside a science fiction story. It features robotic sounds. Imagine hearing sounds from a rusty robot joint and sounds made by robots in a robotic movie.

This sub-genre incorporates many metallic, mechanical sounds, which you may enjoy if you are into these themes.

Techstep’s most unique characteristic is its influence by techno music. The music primarily consists of abstract, synthetic noises.

Deathsetp is what you would get if you mixed the vocals from Death Metal with the beat of Dubstep.

This sub-genre is the most different from the others. It consists of Screamo vocals from Death Metal and distorted electric guitar sounds, too.

Ganjastep is created when you mix Dubstep and Reggae. Ganjastep has a quick beat, but listeners can still enjoy it while relaxing.

Just imagine beats from Reggae type music but incorporated with the drum and bass sounds from Dubstep.

Many famous DJs are also Dubstep artists. Some of their names have appeared on a lot of music billboards. They tend to make other kinds of electronic dance music, but most of them create Dubstep too.

These are considered ten of the most famous DJs that make dubstep music.

A Decline in Mainstream Popularity

Each music genre usually has its own followers and fans as everyone has their own personal tastes in music. Sometimes, other genres of music are easier to listen to than others.

Not everyone can listen to Dubstep or every style of electronic music in general. DJs that specialize in Dubstep also need good technical skills to make it sound good, so it is crucial to make it genuinely enjoyable to listen to.

At the same time, other Dubstep artists like Mount Kimbie and James Blake evolved their music by adapting it into more soulful electronic influenced music.

From studying the history of Dubstep, we can conclude that Dubstep is one of the great results of experimentation with music. It remained underground for quite a long time because not everybody could listen to it.

Other audiences or listeners who enjoyed it could see how much value dubstep music has for the creativity garnered to create it. It is unlike other music, as Dubstep is instrumental and has no actual lyrics in it.

Dubstep is considered a form of music like no other because of its rigorous but accurate beat, making the right people want to dance to it.

The creation of Dubstep has opened the opportunity for DJs to create many new things. It has also opened new perspectives for audiophiles.

While people tend to argue about whether to consider computer-generated music as real music or not, it is best to settle down and listen to what our ears are most comfortable with.

People worldwide have different tastes, so it is quite difficult to marginalize everybody’s music taste. Race, environment, upbringing, and social aspects affect how people enjoy music. Dubstep is just one of many genres of music that bring people that enjoy listening to it together.

Dubstep is yet another fantastic invention in the history of music. We hope this has answered the question What is Dubstep?