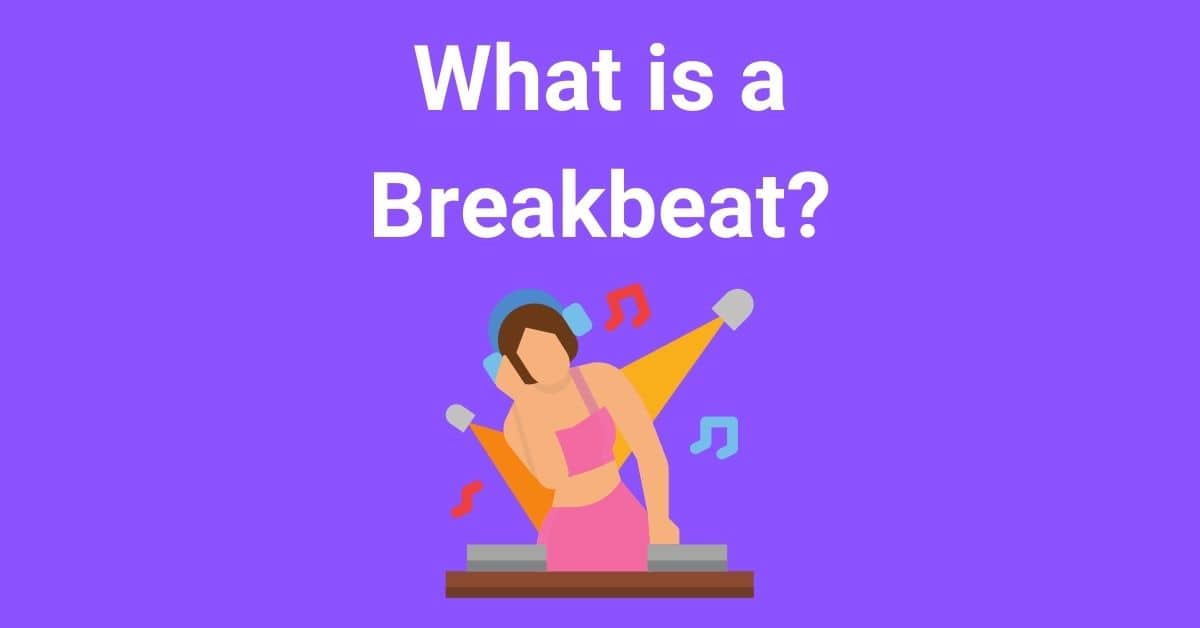 What is a Breakbeat?

Breakbeats have been a popular element of many genres of music for years. From the 1970s to present day, they have been used as way to amplify interesting sounds in songs, while getting crowds of concert-goers excited.

Originally, breakbeats occurred in funk and disco songs. Today, however, they are popular in modern EDM and other well-known genres, with hip hop and house being some of the most notable.

So, what is a breakbeat, and why is it worth reading and writing about?

Traditionally, a breakbeat occurred when only the percussionist or drummer of a band would continue playing the beat, while the rest of the instrumentalists stopped.

In a non-live setting, a breakbeat is simply the part of the song that features percussions while the rest of the instruments pause.

It typically goes on for 4 – 16 measures before the rest of the instruments kick in again. The result is a feel-good vibe that has been loved in the music scene for years.

In many ways, breakbeat was looked upon as a rebellion against the pristine picture that disco presented.

In contrast, breakbeat was raw and appealed to those whose daily experience was lived out in the neighborhoods of the Bronx and similar areas.

Because of this, breakbeats became an influential and integral part of early hip hop culture.

In addition to appealing to members of this culture, breakbeats also needed a contemporary style of vocals and lyricism to go with the methods of looping, scratching, and turntablism in general.

This is how the modern-day MC came to be.

In present day, breakbeats have evolved to a number of different tempos, genres, and subgenres.

Breakbeat can now be a genre on its own, or simply a part of a song of an entirely separate genre.

Either way, the breakbeat has quickly ascended to become one of the most popular musical elements that exists today, adding soul, rhythm, and appeal to every place it occupies.

Here’s how the breakbeat has evolved over the last few decades.

What is a Breakbeat in EDM?

While the term breakbeat was originally used to refer to that particular part of a song that features a drum break, breakbeat meaning has evolved over the years.

It can still refer to a drum break, but since the rise and popularity of EDM, it can also be a genre of its own.

In this context, breakbeat is a genre that typically features a kick drum and a snare drum in a distinct beat pattern.

This combination is produced at around 140bpm, creating a distinct dance music that is quite unlike house and techno.

It was, in fact, during the growing popularity of breakbeats in the 90s that electronic dance music began to take shape.

What is a Breakbeat in Drumming?

Breakbeat meaning is nothing without that fundamental instrument: a drum.

In drumming, a breakbeat is a particular drum pattern that a drummer will play when the melody ‘breaks’.

This essentially means that all other instruments will pause for some time, allowing the drummer to ‘jam’ solo.

Breakbeats in drumming are groovy and funky, with ample opportunity for the drummer to get creative and sometimes deviate from the drumming pattern that plays along with the melody.

Typically, the breakbeats that drummers play are taken from popular hip hop and R&B songs from the 70s through to the 90s.

This phenomenon is a testament to the influence of early breakbeats and its lasting impact on music as we know it today.

What BPM is Breakbeat Music?

As a broader type of electronic music, breakbeat makes use of samples from old-school hip hop, jazz and R&B.

Genres that include breakbeats range from hip hop and big beat to jungle and dubstep.

Breakbeats are able to be incorporated into so many genres mainly because of their tempo.

With most breakbeats having a tempo ranging from 110 to 150 beats per minute, they tend to work well with these up-tempo genres.

However, this is not to say that there is no place for breakbeats in lower tempo music.

These were of a more ambient and ‘chilled’ variety and created especially for chilling.

These beats were mostly reserved for the relaxation sections of lounges, clubs, and events, and are often below 110bpm.

In answering the question, ‘What is a breakbeat?’, it is always necessary to go back to where it all started.

It is believed that it all began in the mid-1970s when West Bronx-based DJ Kool Herc hosted block parties in his neighborhood.

As a native Jamaican, Kool Herc had spent his childhood years surrounded by neighborhood parties and blaring sound systems.

The music of choice during these times was ska, rocksteady, and reggae.

Influenced by these early years and experiences, Kool Herc thought to host ‘back-to-school’ block parties with his sister.

As a DJ himself, he would play R&B records at the events, relying on two turntables, PA speakers and a guitar amplifier.

Some popular artists he played were James Brown and Booker T & the MG’s. While deejaying, Kool Herc noticed that the crowd would get particularly amped when the songs would break into drum solos.

Taking advantage of this, he began to use his two turntables to extend the drum breaks, so that people could enjoy them for longer.

This process involved having two copies of the same record.

When the drum break arrived, the DJ would cue it on the second turntable so that it would continue after it had ended on the first one.

This technique would go on to be one of the most important parts of turntablism, and a reliable way to extend breakbeats for as long as a DJ wanted to.

Just like that, the era of breakbeats and modern hip hop began.

With breakbeats having been used in a number of genres from hip hop to EDM, there are indeed a number of distinct types of breakbeats which have developed over the years.

These tend to be viewed as genres of their own and have come to mean more than just that section of a song where the instruments go quiet.

As the name suggests, downtempo breaks are slow-paced beats, with relaxed, mellow compositions.

These breakbeats are often a part of songs that feature elements of jazz, along with scratching and other musical elements.

Famous artists who make use of downtempo breaks are Kid Koala and Bonobo.

Originally popular in Florida (specifically Tampa and Orlando) these types of breakbeats can be considered the very first beginnings of what we now know as breakbeat EDM.

The sound is a distinct combination of hip hop and electro, with samples of jazz and funk in the mix.

Also known as spiritual techno, West Coast breaks is a downtempo genre that was popularized by the ‘90s rave scene in Los Angeles.

Acid jazz, dubstep, and drum and bass fall under this mellow type of breakbeat.

In electro beats, there is a clear influence from funk.

This genre is made even more unique by the use of a specific drum machine called the Roland_TR-808.

The sound is distinctly EDM, with powerful beat breaks that amplify the energy.

With a fairly recent emergence towards the late ‘90s and early 2000s, Nu Skool breaks is a genre that offers an eccentric sound.

It is abstract, with elements of other EDM genres incorporated.

From humble and unexpected beginnings, the breakbeat has become one of the most interesting and crucial elements of modern music.

With a touch of influence in modern hip hop and electronic dance music alike, its impact cannot be denied.

Breakbeats add depth and emphasis to all types of music, making them a crucial part of the sounds we enjoy today.

Whether you are at a music festival, a lounge or club, or walking with your headphones blasting one of your favorite playlists, you are likely to come across a breakbeat.

The sheer prevalence of breakbeats in music both past and present is a wonderful illustration of their importance, which is unlikely to die down any time soon.