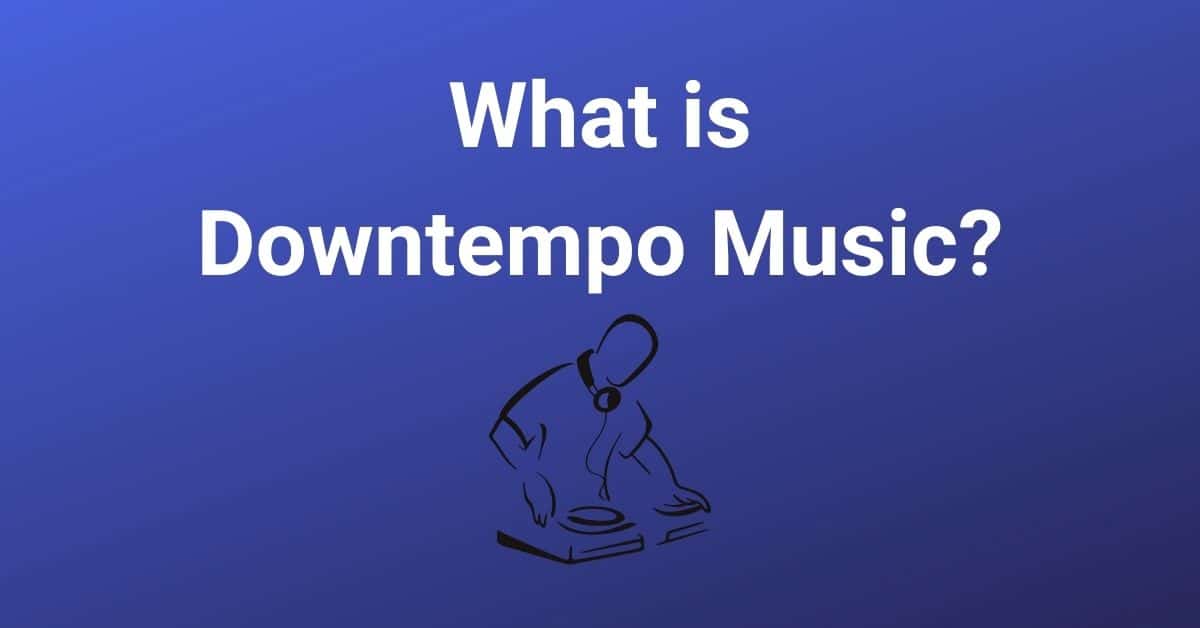 If you are familiar with streaming platforms such as Spotify, Youtube Music, iTunes, and others, it is quite easy for you to find music that has a title such as chill music, ambient music, chill hop, downtempo EDM, and sometimes with more specific titles such as relaxing musing, background music, focus music for study, etc.

You may also have heard of popular music that you know so well but played at a much slower pace.

It is likely that you have heard downtempo music whether you intended to listen to it or not. It has now become extremely popular especially since the rise of lo-fi remixes that have spread all over the internet.

So, what is this relaxing slow tempo music is all about? Are they all the same? How can we tell the difference? In this article, we will discuss a little deeper about downtempo music.

A genre of electronic music that has led to the birth of other types of relaxing slow-paced musical genres.

What is Downtempo Music?

Downtempo is a genre of electronic music. It is similar to ambient music and is often used synonymously with trip-hop.

But there are a few distinct differences between them. Unlike ambient, downtempo emphasize its beats. It also uses less earthy sound than trip-hop.

Downtempo is remarkably similar to ambient music, but with more groove or beat. The drum patterns may vary.

It can be simple, but sometimes also more complicated. One of the most noticeable things about downtempo is that it is much slower and less intense than another kind of dance music.

In other words, you can still dance to downtempo but a slow, relaxed dance.

The history of downtempo can be traced back to the 1990s when a wave of slower music was played throughout clubs.

It started to gain popularity in Ibiza when DJs started to play slower music to bring down the vibe when the night was almost over.

Downtempo is a branch of electronic music. In the late 1980s, trip-hop was born. It was a music that combined different elements of hip hop, drum, and bass, and ambient but played in a slower tempo.

In the 1990s, melodic electronic instruments started to be incorporated into the music and that was how downtempo was born.

After that, some subgenres of downtempo was born. One of them is downtempo pop which gained its popularity in the 2010s.

This leads to the birth of even more sub-genre such as chillwave, lo-fi, and hypnagogic pop. Nowadays, other forms of downtempo music such as chill hop and lo-fi have become extremely popular across multiple online streaming platforms.

What is Considered Downtempo?

Downtempo has now become an umbrella term for a number of different genres. There are now so many subgenres that belong to downtempo music.

This gives downtempo a broader definition and cannot be described simply by following a certain list of rules. This happens because downtempo itself combines many different genres.

Not only from the electronic music genres, but some other genres as well including jazz, techno, trance, and much more.

Some people say any music that is played in slow tempo can be considered as a downtempo. Its name definitely gives that opinion a point.

Even if describing a genre can be seen as oversimplifying things, in short, downtempo can be recognized by its slow-paced tempo with heavy bass.

The kind of music that is perfect for background listening, played before a gig, or to bring down the vibe of the crowd after a long night.

Some downtempo tracks incorporate vocals in a very subtle way, which fits with the tranquility of the instruments.

Sometimes, music is too complicated to simply be described in words. Music connects directly with feelings. In downtempo, you can feel a lot. Sometimes you can even feel a bit nostalgic. You can listen to downtempo and feel a certain way. It is different for everybody.

Some people remember the best memory they have. Some remember sad memories in the past. Some feel a little lost in their mind while others feel more focused on their study or works while listening to downtempo.

The term invented does not feel right when it comes to a musical genre. A musical genre develops through many years of experimentation and development.

Especially with electronic music when the creativity of the artists is almost unlimited.

But in this case, downtempo music started to gain its popularity when Austrian duo Kruder & Dorfmeister released a lot of remixes of pop music, hip-hop, and drum and bass tracks in a slower tempo with an influence of soul-jazz music. After that, more artists produced their downtempo remixes.

Artists such as Britons Steve Cobby and Dave McSherry produced a bunch of downtempo and ambient techno remixes which became the foundation of the downtempo style.

In Washington D.C, Eric Hilton and Rob Garza added Brazilian sounds to the style which enriched the genre further.

Following that, new recordings from several artists such as Aria from Iceland, Zero 7 from London, and Blue Six from New York expanded the downtempo genre even more by incorporating its sound to other genres.

Countless artists have created downtempo music. Some of the most famous include:

The band was known by the name “Ariel” before they change the group name to Alpha. It originally consisted of two members Corin Dingley and Andy Jenks. In the late 1990s, they recruited singers to add vocals to their downtempo tracks.

Their debut album “Come from Heaven” was released in 1997 under Massive Attack’s Melankolic label. They now releasing tracks under Don’t Touch Recordings, a label they founded.

An electronic music project found by Toby Marks. The music of Banco de Gaia is often categorized as downtempo and ambient dub.

The Berlin-born musician writes, produces, and performs with several other artists.

Gaelle Adisson is a downtempo singer/songwriter born in New Jersey. Aside from downtempo, Gaelle produces tracks in different genres as well such as deep house, R&B, and soul.

Gaelle released the album “Transient” in 2004 and released several singles throughout the years.

Simon Posford who is known for his stage name Hallucinogen is an English musician specializing in psychedelic trance music.

He founded Twisted Records label and work with several electronic groups such as Younger Brother and Shpongle.

Their music is characterized by nu-jazz, Latin jazz, as long as chill-out style. They work as remixers for many acts such as Marshmallows, Ian Pooley, Incognito, and many more.

An Austrian duo known for their trip-hop/ downtempo remixes. They are arguably the reason we know downtempo music now.

Aside from producing remixes for different music such as pop, hip-hop, and other genres, they also release multiple albums throughout the years.

He won the prestigious Avanti Craft award for his score on the short film “Angels in A Cage.” The musician now lives in Taiwan.

Soulstice is a downtempo band consists of Gina Rene, Gabriel Rene, Mei-Lwun, and Andy Caldwell. Their music is characterized by downtempo, trip-hop, and electronic soul.

Gina and Gabriel Rene are sisters and they both were The X Factor contestant.

Zero 7 is an English duo consisting of Henry Binns and Sam Hardaker. Their debut album “Simple Things” was released in 2001.

They often collaborate with many artists such as Sia, Sophie Barker, Mozez, etc.

Is Downtempo Music the Same as Chillhop or Ambient Music?

Unless you pay close attention to find different sounds that make each genre unique. To make things even more complicated, sometimes a single track can be labeled as downtempo, chillhop, and ambient at the same time.

But we will try to explain the small details the distinguish the three of them. Ambient music adds a layer of tone and atmosphere over traditional music structure.

It can be sounds of nature to melodic sounds. Ambient music can be recognized by the lack of beat. Downtempo is remarkably similar to ambient music but emphasizes more on the beats.

While chill hop also called lo-fi hip-hop is a microgenre of downtempo. It takes the principles of lo-fi and hip-hop. It can be recognized by repetitive beats and downgrading samples.

Downtempo has a very broad interpretation. Everyone has their own opinions towards downtempo.

The fact is, unlike other music, downtempo has no certain set of rules to follow other than the slow-paced tempo and chill feeling it gives to the listener. Any kind of instruments and other musical genres can blend very well with downtempo.

It is also a genre that keeps evolving and it seems like it will retain its popularity long into the future. Every artist can make their own downtempo tracks. Even some artists that are often called amateur musicians make their downtempo remixes and add their own style to them.

It is safe to say that downtempo is music for everyone. Even if it is not the kind of music, we will choose first thing at a party, it is arguably music everybody loves. Some music genres have their militant fans as well as their haters.

With downtempo, it seems hard for anybody to hate the music. It can be played at lounges, clubs, and cafes, without you even realizing it. And you will not feel disturbed by it.