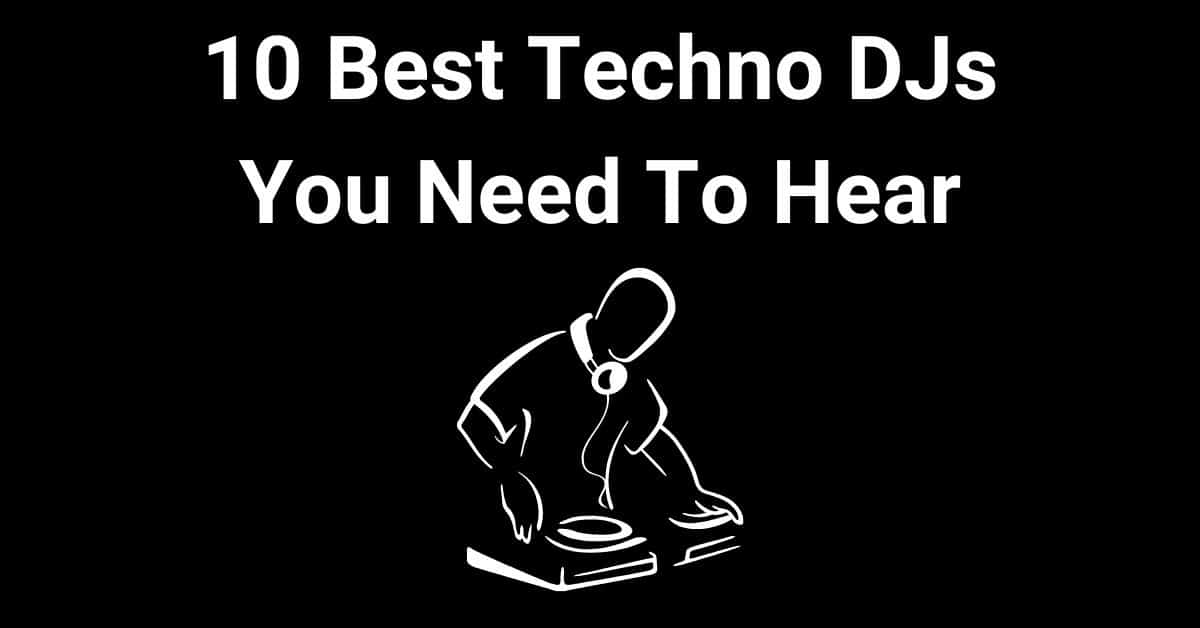 In this all-new DJ overview and guide you’ll learn about the best techno DJs you need to start listening to and we have served up some of their top tracks to get you started.

If you are eager to just dive into the music you can click the links below to go right to the 10 best techno DJs you need to listen to today:

Techno music takes its roots from EDM. The sub-genre is now gaining significant momentum where music lovers from around the globe enjoy it thoroughly.

If you are one of those people who does not know about techno yet, then let me say,

“You’re in for a treat” and also you need to come out of your bubble!

It’s time to experience a genre of music that has the power to translate your emotions and run shivers down your spine.

The thing that differentiates techno from other genres is its ability to shake you. You can literally feel it.

Unlike music genres that feature lyrics, Techno has nothing for you to cling onto, giving you all the right reasons to just dance.

It is the music for your soul.

These are just some of the many reasons why Techno DJs and artists captivate their audience with powerful beats and sounds.

What is Techno Music?

Techno has the ability to transport you to the world of your dreams, painting your memories, engaging your mind and soul and creating a lasting aura!

One of the most popular sub-genres of electronic dance music, Techno distinguishes itself from other EDM forms in two key aspects: (1) Powerful and energizing beats and kick drums, and (2) futuristic sound from samples.

It does not matter if you have been following the Techno scene for a long time or just starting to like genre, Deep In The Mix is here to help you stay relevant.

This means the music industry and Techno artists have evolved over the years. Let’s discuss about the ‘current’ best techno DJ and artists.

The list will not only help you stay relevant to the Techno genre but explore newer names who are disrupting the scene with their music.

There’s no Techno without Carl Cox. The man, the myth, the legend! An inspiration to the existing and upcoming Techno artists and producers, Carl Cox was born in 1962 and is an industry veteran.

The British artist, producer, and DJ is a widely followed for playing music, celebrating life, and mood setting tunes since 1991.

Let’s have a look at Carl Cox’s best released to date:

Did you know that Nina Kraviz is a former dentist? Now mainly known for her Techno acts and harder sounds, Nina is a Russian DJ and producer.

Born in 1982, Nina Kraviz is the ‘female’ face of Techno music who also owns her own record label called трип (English: Trip).

Nina Kraviz released her debut studio album in 2012 and she has not stopped since then. Her best releases are:

Nina Kraviz – My Lullaby For You

The face of ‘commercial’ and ‘mainstream’ Techno music – Adam Beyer!

Not many Techno DJs and artists experienced the fame and popularity that Adam Beyer got in his career.

The Swedish techno artist is the one to watch no matter what year it is. He’s the Drumcode boss who runs a successful Techno-based label and festival.

One of the pioneers in Techno music scene, Jeff Mills is an American record producer and DJ. He came onto the scene in the early 1980s with a distinctive crowd-pleasing sound.

He was known as an excellent curator due to his incredible technical abilities as a DJ. He also founded a Techno label called Axis Records in 1992. Majority of his creations are released under his own label.

The artist returned to the scene with an amazing album in 2019 called Moon – The Area of Influence.

You can hear some of the best Jeff Mills tunes below:

Amelie Lens is Belgian born and raised Techno record producer and DJ. A very new name to the scene, Lens captivated the dance floor in 2016 with the release of her debut single Exhale.

Since the release, the track was support by big name artists and played in almost every club and festivals. She received instant fame and success and is now one of key figures of the Techno scene.

Get familiar with her sound by listening to her best tracks.

If you love Techno and you love House Music, you would definitely love Joris Voorn.

Born in 1977, the Dutch DJ and producer is a popular name in Techno and Tech House. He started his career in 1997 and released his first single in 2000 called muted trax pt.1.

Since then, he has not stopped releasing one banger after another!

Joris is known for bringing traditional techno sound combined with a bit of melody.

Thus far, he has four studio albums and numerous EPs to his name.

If you have never heard of him before, let us help you get acquainted with the name!

This particular sub-genre of EDM has seen a lot of Techno DJs and artists recently. One name who is very popular among the masses is Charlotte de Witte.

The female Techno record producer and DJ is known for her acid and minimal techno sounds. Her quick fame and success are credited to incredible releases which got support from popular Techno artists.

Charlotte also runs a record label called KNTXT. Majority of her productions are released under this label.

Some of her best tracks and remixes are:

The Queen of Naples!

Started his professional career as a waitress and dancer in a club for several years, Deborah de Luca is a perfect example of ‘hard work pays off’.

Her determination and will to become a successful Techno DJ and artist turned into reality in 2013 after founding her own record label called Sola_mente imprint.

She’s a DOER. Hence, Deborah didn’t want to wait for other labels’ “YES” to release music. With majority of her own production on the label, she is the one you need to hear this year.

Let’s have a look at some of her successful tracks:

Enrico Sangiuliano earned success due to his association with a big Techno label, Drumcode.

Based in Italy, Enrico has been in the scene for several years and his quality of producing one hit track after another has been consistent.

From Drumcode to Alleanza and Gem Records, Enrico has had the pleasure to work with major record labels in the Techno scene. His biggest and most successful EP is called Moon Rocks.

Listen to some of his best work:

Moby – Why Does My Heart Feel So Bad (Enrico Sangiuliano Remix)

Daniel Avery started his production career in 2009 under his alias called Stopmakingme. He continued producing music under the alias until 2012 after which he reverted to his birth name to go BIG in the industry.

He has been one of the icons and most loved Techno DJs in the scene right now. With a couple of successful studio albums and numerous releases under his names, Daniel brings his signature softer palette touch in Techno.

Daniel Avery is known for so many popular tracks. Some of them are:

Daniel Avery – All I Need

Daniel.Avery · Daniel Avery – All I Need

With the rise in popularity of EDM recently, Techno music has been on the forefront for avid and new listeners.

More people are exploring this sub genre, and to help them, we have created this short guide of 10 best Techno DJs you need to hear in 2021.

Do you have a personal favorite that is not in the list? Share with us what you love about that artist. We would love to hear from you!